I wrote earlier of my plan to read all of the Newbery Award winners that I have not previously read. I began my quest and happily discovered that taking these books to the gym is a great way to combine two of my year’s goals. The books – because they tend to have larger print – are easier to read on the treadmill that I have vowed to return to at least three times a week!

Rather than do a standard review of the books, I thought I would just provide a little this and that about the book, the author, and the times. Here are my first two reads on my Newbery journey: 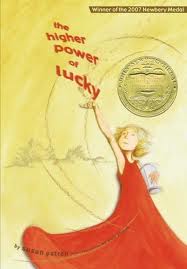 Book: The Higher Power of Lucky

Something about the author: Susan Patron is a retired Los Angeles librarian who wrote her first book in 1990. When Lucky was awarded the Newberry, there was much controversy over her use of the word “scrotum” in the book’s first pages. The context of the word was as part of a story about a dog getting bit in said place by a rattlesnake. About the controversy, Patron said that she took the event from a real life story, and that the use of the word was intentional.

What it’s about: Lucky is a ten-year old girl who is living in a small California desert town with a Guardian – who happens to be an ex- of her father. Lucky’s odd job is to clean up around the town business where all of the twelve step groups meet. Through her listening in on conversations, Lucky is introduced to the idea of a Higher Power and the benefit a Higher Power can bring to a person. In her quest to find her Higher Power, Lucky goes on an adventure that leads her to her own answers.

Somethings about that year: Nancy Pelosi became the first speaker of the House, the IPhone was introduced, Bush orders more troops to Iraq, Denis Johnson’s Tree of Smoke won the National Book Award for fiction.

Favorite part: When Lucky and Lincoln go on a quest to change the punctuation on a traffic sign. In this section, Patron brings the friendship between Lucky and Lincoln into focus and you realize how important they are to each other and how much each admires the other.

Favorite character: Lincoln is Lucky’s friend in town. Lincoln’s mom thinks that he is going to be President, but all Lincoln wants to do is tie knots. He can tie some of the most exquisite knots in the world and he is always seeking out more and better knots.

Something about the author:  During World War I, Lawson served as a member of the first Camouflage Company. The role of the company was to create fakes to fool the enemy. Its members were other artists that served in the unit stationed in France. Lawson wrote and illustrated his first children’s book after the war.

What it’s about: The animal residents of Rabbit Hill farm are in a tizzy about newcomers to their abandoned farm. Their emotions range from lust for the food that will finally return, to fear that there may also be dogs or cats that come with the newcomers. The family that arrives turns out to be more than the animals could have wished for. The couple seems to enjoy their animal neighbors, their cat is too old to care about anything beyond its reach, and they seem to be planting a giant garden. A minor hiccup occurs when one of the spunky young rabbits is injured and retrieved by the couple, and speculation about the too-good-to-be-true owners rages among the animals.

Somethings about that year:  Going My Way won the Oscar for best picture, Alexander Fleming won the Nobel Prize in Medicine for the discovery of penicillin, World War II comes to an end.

Favorite part: The animal procession through the garden at the end of the book is completely charming.

Favorite character:  Papa Rabbit who is a Southern Gentleman living in Connecticut. None of his fellow animals care to hear his tales of the good life in bluegrass country. It is hilarious how Lawson writes the other characters cutting him off when he starts in on his reminiscences.

What’s on the treadmill now? Ginger Pye by Eleanor Estes (1952) 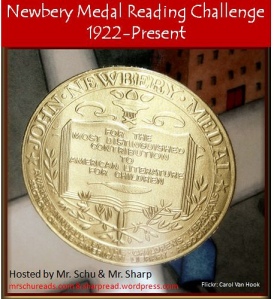