Yesterday, a long overdue task was accomplished. Thanks to a Groupon, we got our living room furniture cleaned. For a reasonable fee, our couch and two chairs now look a whole hell of a lot better. Watching the guys vigorously brush them prior to the cleaning, however, was horrifying. Blech!

But this all got me thinking about the different furniture that we have had during our years of marriage. When we got married, we had just graduated from college. We spent the summer in Schenectady – still working our college jobs – before we headed to Missouri for Dan to start law school. When we left, I don’t remember that we brought anything from the college apartment other than clothes and books. Our bed had been a twin bed on a board elevated by four cinder blocks. The dresser was a thrift store throw away. That was all we had, and I think we left it all left behind.

On our way from Schenectady to Columbia, we stopped in Sinclairville. There we picked up the U-haul and our furnishings. We got the maple double bed that had been mine growing up, and which had been my father’s when he was a boy. The bed was a little quirky in its antiqueyness. It didn’t quite fit modern day boxsprings, so you had to have the boxsprings precariously balanced on the edge of the frame. If you got too rowdy, it would plop down into the slats and your mattress than would have a pretty significant slope. It didn’t matter. It was a huge step up from a twin on a board. Rounding up our haul was a four drawer dresser that was also a family piece. We got my growing up desk, which was something that I saved many allowances to purchase with my own money. We had four peach crates full of albums and books. Beyond our wedding presents and several more boxes of books, I think that was it.

Because Dan had come down with mono on our honeymoon, we recruited one of his high school friends to help us move into our new apartment. We walked into our new digs for the first time on the day we moved in. It was right across from the bus station – had gold shag carpet – and it became the first home of our own. Our furniture was just right. The bedroom was too small for our double bed, so the bed went in the living room and became the main sitting space. The kitchen was about a 4 foot by 16 foot galley, so our one piece of new furniture – a kitchen table with folding chairs, also was in our main room. Rounding out our space were the peach crate/tables that held the record player and a few pretties from our wedding. I can still see that place clearly.

Since that first space, we have acquired more space and more things. After law school, we moved to Kansas City and into a brand new apartment complex. It was then that we bought our first couch. It was a blue sturdy sofa bed. We also now had a rocking chair that would be useful to rock the new baby who would soon be joining us.

We bought our house in 1988. The blue couch came with us. We picked up some more chairs.

The furniture that we have now is third generation. In between the blue couch and this, there was a leather furniture period.

When we go to museums, Dan always balks at the “rooms with furniture” displays. I really like them. I think that one of the reasons is that it does bring me into the world of that time. It is the same thing I do when I think of a particular piece of furniture that was in my growing up home, the home of someone I know, or my own home. For my own home, I can picture rooms and the times. I can bring back holidays and just hanging out days. We may not pay much attention to them most of the time, but the things we sit on play their part well.

Today’s Newbery rundown include my so far favorites. I believe that I want to be E.L. Konigsburg. Besides the two books that I am writing about today, she has written several more – three that feature her grandchildren. Goodness, gracious that gets me.

Something about the author: Elaine Konigsburg went to college to be a chemist, but she did not find life in the lab suited for her. Moving to Florida with her husband, she taught high school chemistry at a private girls’ school. In later interviews, she remembers that she went into the job thinking that she would find a bunch of privileged, spoiled girls, but what she found were girls just like she once was – wanting to please, wondering about the world; figuring out who they were. When Mrs. Konigsburg stayed home to raise her children, she used her own experiences, her students’ experiences, and her own children’s experiences to build her stories. Without ever having published anything, she sent her first book with her own illustrations to a publisher. It was published in 1967.  Her second book was accepted and published that same year. Those two books, Jennifer, Hecate, Macbeth, William McKinley, and Me, Elizabeth, and From the Mixed-Up Files of Mrs. Basil E. Frankweiler became the Newbery Honorable Mention and the Newberry Medal winners in 1968. It was the first and only time for any author to accomplish this. Twenty-nine years later she was awarded her second medal with her book, A View From Saturday. 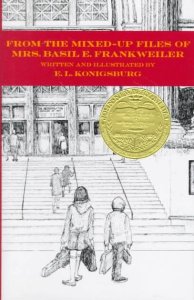 From the Mixed-Up Files of Mrs. Basil E. Frankweiler

What it’s about: Eleven year old Claudia needs to get away from her family to escape her plight of just being Claudia. She is not appreciated. There is sameness to every day that she must escape. Because she appreciates the creature comforts, she could not imagine pulling off a traditional runaway. Her plan involved heading into New York City and camping out in the Metropolitan Museum of Art. She recruits her nine-year-old brother – he has the most money and is the least obnoxious of her siblings. The two children make it to the city. They live in the museum for over a week. Best of all, while they are there they investigate the authenticity of a sculpture sold to the museum by a Mrs. Basil Frankweiler. The sculpture is drawing crowds to the museum, and it may or may not be a work of Michelangelo. Through their work and their eventual encounter with Mrs. Frankweiler, Claudia finds what will return her home with the difference that she was looking for.

Somethings about that year: What do you say about 1968? It was the year of the My Lai massacre, Bobby Kennedy and Martin Luther King’s assassination, and the emergence and expansion of the Civil Rights, Anti-war, and Feminist movements. In an essay, Konigsburg notes that the book did not include notes about the contentiousness of the times, because the children would have been unaffected by it. She wrote. “Theirs was a journey inside, and Claudia’s war was with herself.” 1968 was also the year that Laugh-In made its debut. It was needed.

The other thing about 1968 and the Newbery’s is that the awards dinner was held right here in Kansas City. The edition of the book that I read contained an afterwards written by Konigsburg for the 35th anniversary of the book. She also included a piece that was included in the Newbery program that year that featured a drawing of Claudia and Jamie and a script of their discussing the Newbery honor. Charming.

Favorite part:  Claudia has very definite thoughts of what they need to do to maintain a proper lifestyle – even as runaways. She changes her underwear daily. They go to the laundromat. My favorite is when they gather paper towels and powdered soap from the museum restroom and take their after hours bath in the huge fountain in the museum’s indoor courtyard. The two page illustration that goes along with this reminded me of a painting of Matisse. Joyful.

Favorite character: While I want to say Claudia, I think I need to say brother, Jamie. Jamie is the one who identifies the rings left by the sculpture as identical to the logo of Ballentine beer. He then takes time to start humming the theme song that he heard on a commercial – much to the annoyance of his sister. 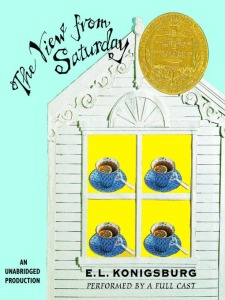 Book: A View from Saturday

What it’s about: Epiphany Middle School needed to choose an Academic Bowl team with the hope of it advancing beyond the school competition. Mrs. Olinski’s choice of three sixth-graders didn’t really make sense to anyone. They weren’t the best students, and they were all a little quirky. But they kept winning. They beat the other sixth graders, the seventh graders, the eight graders, and it was on to the regionals and state. They were unstoppable, and the stories that brought each of them to a place where their position on the team made perfect sense, are charmers.

Somethings about that year: 1997 gave us Radiohead’s OK Computer and The Spice Girls’ Spice. Yea, I know.

Favorite part:  Noah is told by his mom that he needs to write a thank you note to his grandparents in Florida. Noah’s story in the book, involves him dissecting why writing a thank you really doesn’t make sense since it was he who really provided the thanks-worthy services. He, after all, was a best man stand in for his grandparents’ friend, and he kind of made the wedding a success. Noah’s breakdown of the events is great.

Favorite character:  Noah. He learns how to do calligraphy and teaches his friends. Hero.

“There’s a lifetime of secrets in those files. But there’s also just a lot of newspaper clippings. Junk. It’s a hodgepodge. Like my art collection. Now, you’ll tell me all about your running away, and I’ll add that to my files.”   –  Mrs. Basil E. Frankweiler