Pickles! I need to get this blog post done before the name becomes obsolete! Just to put you in the right place, the last week that I am talking about is the week of February 15. I know! That seems like longer ago than a week to me too! Maybe it is the waning days of winter that seem to adjust the speed of time or something. Anyway, before it expires, here are a few of the good things that brightened my last week.

Birdie Arrives – Okay. I am going to cheat here a little bit. On February 20 a little girl arrived into this world who was anticipated to be adored to such a level that she would likely always have a sunshine aura around her. Birdie has a mom and dad who have waited so patiently for her and who will probably be some of the best parents a girl could have. She has grandmas and a grandpa who will be there for her always. She has aunts and an uncle ready to embrace her as a new part of their lives, and that just can’t help but make them better. She has cousins who will be friends and playmates. She has extended family that are all so excited to meet her and fall for her too. And she has people like Dan and me who, though we share no blood, we feel as much a part of her family as genetic boundaries allow. The cheating part of this is that even though Birdie arrived last week, I did not meet her until this week. And she is perfect, and she is loved well. 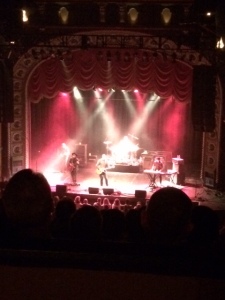 Another Gushy Review of Jason Isbell – On Tuesday we went to see Jason Isbell and his band play at the Uptown Theater. This was #6 Jason Isbell show for us. I would say it was probably the best yet. His band is so good, he was so engaged and seemed to be having so much fun. There was something else about seeing him this time. This is weird coming from someone who has never met the guy, but I felt so proud of him. When we first saw him in 2009 he was a different man from the one he is today. You see it in pictures from the time – talent out the wazoo, but hazy from drinking. On Tuesday, along with all of the fabulous musical moments, was his presence as a healthy and happy man. It has been his journey, but as a person who loves the music he makes and the persona that he shares with the world through social media, I feel like I have had some read into where he is now. He and the band encored with the Rolling Stones’ Can’t You Hear Me Knocking which was rocking good fun. After that, this part of his tour ended and he went home to be with his wife. A couple days later on Instagram he posted a picture of his hand on Amanda’s slightly rounded tummy. Happy and healthy.

A Saturday Walk – The weather has been super weird. One minute they say it will snow, but then it doesn’t. Last Thursday, I heard nothing about snow, but I left work (minus my boots) in a real dilly of a snowstorm that kept me crawling through the downtown streets, but as soon as I got a couple miles south the sun was shining and the inches of snow on my car looked very out of place. Weird. Last Saturday was supposed to be weathery, but it turned out to be beautiful. Dan and I are still working hard on getting our steps in, so we used the opportunity to take a walk to Waldo Pizza for lunch. We were extraordinarily good and had salad bar and no pizza. We rewarded our goodness by chasing our salad with one of the best deals in beer flights (and a great selection) in the city.

Final Season of Justified Started – Raylan Givens is a bad ass, and Boyd Crowder is too. I will be sad when this program ends. In the meantime, I will savor every moment of this show and be so happy every time there is a scene where Raylan and Boyd talk to each other. It is tv brilliance.

Movie Night – We have not been very good with keeping our monthly movie date with our friends. This month, however, we got it done. It’s a good way to end the day to leave work and sit down with people that you want to catch up with and fill in the gaps since the last time you did that. We did that and then we went to see American Sniper (not a huge fan, but, oh, that Bradley Cooper!) and then we went and had some more catchup over a nightcap.

Wishing everyone a wonderful week as March rolls in!