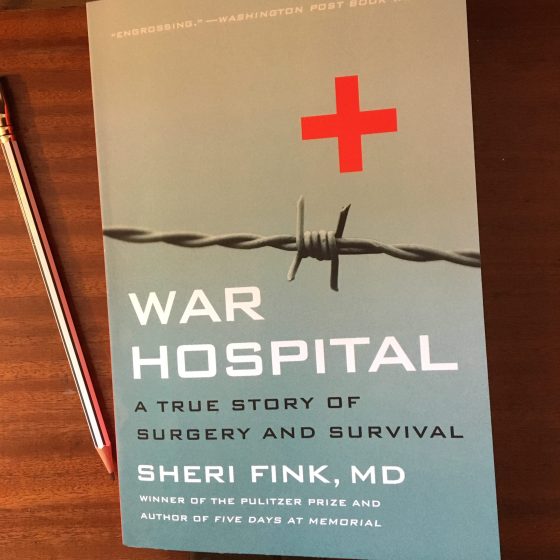 War Hospital – A True Story of Surgery and Survival by Sheri Fink, MD

I just finished my fourth book for the year in my quest to read 52 books this year. I am enjoying the extra time that I am putting into making myself step away from other distractions and giving my attention to words.

Sheri Fink’s non-fiction work, published in 2003, is an incredible telling of what happened in the city of Srebrenica during the Bosnian War – a horror that raged from 1992–1995. Fink’s work focuses on a warzone hospital and the individuals who worked there. She writes of the paths that led the heroes of this story to the hospital. She describes how they learned the practice of war medicine in real time. Reading about the hospital’s day-to-day, you see the doctors and nurses suffer horrible losses, and work through grisly conditions. The physical, mental, and emotional toll is brutal. At the book’s end, only during the horrific massacre that took place in their village and threatened everyone, do the doctors, nurses, and others leave.

At its conclusion, Fink poses questions about the presence of humanitarian workers in such situations. Do such services provoke a false sense of normalcy and security? What is the responsibility of the medical professional when there is clear violation of anything resembling humanitarianism? Are expectations of neutrality for medical professionals the right stance?

I remember watching the 1984 Sarajevo Winter Olympics. It was a beautiful venue amidst picturesque mountains. People sat at sidewalk cafes drinking coffee and wine. Ten years later, those mountains sheltered snipers, foragers for food, and refugees trying to find a safe place. The Olympic stadiums were in ruins and marked by warfare. It is hard to believe it can happen. This book made me understand what happens when it do