I found it hard to believe that Ryan Adams had never released an eponymous album before his newest release, which is the album that Dan and I listened to this week. When you think of a self-reflecting musician, Ryan Adams might be a list leader. But the choice of title seems to more reflect a freedom of production, than anything else. It is the first album created in his own PaxAm studio in Hollywood.

On first listens, I couldn’t get over that first song. Gimme Something Good made me think of Don Henley and The Eagles. I do not like Don Henley and the Eagles. When you start out immediately put-off, there is some work to be done if you’re trying to give a fair and balanced review. Did that happen over the next ten songs? Kind of.

This is an undeniable fact about this album. The guitar work is masterful. Whether it is simple acoustic, surfer strings, rocker electric lines – the guitars nail it. It made me picture Ryan working around the studio with a lot of other people who love guitars and words and how you make them go together. In the song Shadows, he  moves from simple electric chords to a drop dead dirty mashup of electric wails half-way through and then back again to quiet. That sound has a dark spookiness that I liked very much. Each song brings its own guitar signature.

As for the words, the little booklet that comes with the cd shows a picture of a notebook with a couple of the songs written in it. The lyrics are written like poems – not really paying attention to the lines on the page – big black pen letters – cross-outs – a little messy. Song after song reflects its own bit of life messiness.

The songs that I like most are the more broody ones in their combination of those guitars and the lyrics. My Wrecking Ball could be taken straight from Heartbreaker. It is beautiful and he has that little bit of quiver in his voice that breaks a heart. Ryan Adams sings internal struggles as well as anyone I listen to.

Driving through the streets tonight

It’s hot, I’ve got the windows down

I wish I could call you, I wish you were still around

Nothing much left in the tank

Think I forgot what it needed but somehow still survive

And all the walls we built they must come down

As a whole, the album is uneven for me, the listener. I think that is my own prejudice (aka sounds like the Eagles) and not a fault of the album. I do like the freedom that the album seems to have. I like that the expanded sound of a song like Trouble, that still gives you incredibly poetic lines like:

Hey, there’s a year and a day for every line
on my face
Like a map of my sins

That right there is some good song writing, and it is found throughout the album. Sometimes it just gets delivered in a style that is not my favorite. I think that if you go over to read what Dan has written about this album, you will find a more clear eyed and eared review that very nicely walks through this album.

Next up: Alvvays by Alvvays 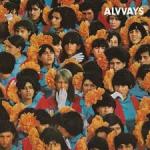