Here it is, Sunday night and I sit trying to put the finishing touches on this blog post. Sometimes it is easier than others to come up with the list. That is why I do this. No matter how easy or hard it is, this makes me spend time thinking about it and getting it down. Here are my good things noted during this past week. I won’t tell you if it was easy or hard 🙂

Lobster Fest – This is two weeks in a row that I have included lobster as one of my good things. I can almost guarantee that this trend won’t continue, but I couldn’t possibly leave it off this week. Last night, for the fifth year running, we hosted Lobster Fest. Lobster Fest involves live crustaceans making their way from the East Coast to Kansas City via overnight and landing in our back yard where they are unpacked and steamed. Our shelled friends this year were slightly over two pounds each and yielded delicious meat. I must admit that my lobster eating was limited to the tail and claws because along with the lobster, everybody brought a dish to share. We started out with artichoke dip and Cape Cods. For dinner, we had a macaroni and cheese that had caramelized onions, bacon, and a list of cheeses. There was a vinegary slaw with cucumbers. I made my favorite cheesy biscuits that I pretty much fantasize about all year long. They are buttery, cheesy, and they get a dusting of sea salt on top before they bake. Dessert included these tiny cream cheese cookies and a pudding flavored with cardamon. Sharing this feast with the crew has made this annual event such a memory maker! Coming out of this year is a pledge that next year we will not don the plastic lobster bibs that come with the shipment, but handmade bibs designed by Nate and sewn by Micaela. I am counting the days already!

Fleece Lined Leggings – Wednesday morning I had to scrape my car. It was darn cold! Lucky for me, earlier in the week I had received my Amazon order of fleece lined leggings. This is a new discovery for me and so wonderful! They are soft and warm and the perfect complement for a cold day! I might have to order some more. I feel a uniform being created.

Heir Encore sung by Charles Aznavour – I don’t speak French and I don’t have a strong tie to anything French. This week, however, I had a transcending event with a French song. I was driving to work listening to Slate’s Culture Gabfest. The episode included segments about a new French film and a French television program. At the end of the show, they signed off and a song came on. At the time, I had no idea what it was, but I looked it up as soon as I could. It was Heir Encore performed by Charles Aznavour. It turns out that Mr. Aznavour is one of the most popular singers in the world. In 1998, CNN named him the Entertainer of the Century. Not only does he have extensive recordings, but he has been in tons of films, is a noted humanitarian, and was Armenia’s ambassador to Switzerland. Heir Encore has been recorded in English as “Yesterday When I Was Young,’ but the English version, in my opinion, doesn’t match the French version for beauty. Without any clue as to what he was saying, my imagination transported me on my drive to work. Dan and I were back at the Piazza San Marco in Venice, sitting at the Florian, drinking champagne. The band performs this song, and we dance.

Good Training from a great Trainer – On Friday I attended a training on Project Management. It was an all day Covey workshop that was offered though my work. I learned a lot and left with some great tools and ideas. It was the trainer, however, who really made the day great. I attend a fair number of talks, meetings, and trainings. Earlier last week I had gone to a talk that I held great expectations for, but the speaker just didn’t have it. The leader of the Project Management workshop did have it. She was  knowledgeable and enthusiastic. She called us by our name and made sure that everyone was engaged. She had amusing asides that she shared and made us laugh. I left the classroom with knowledge and gratitude. 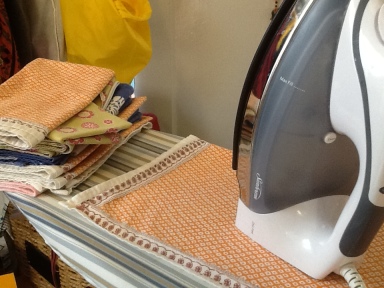 Ironing Napkins – This is a weird one, but it has the quality of life element to it that makes it a good thing. We have used cloth napkins since as long as I can remember. It just seems like an easy way to reduce waste. We have about 40 cloth napkins in various stages of wear. Some we have several of; some we only have two of. There is something about the napkins being ironed that is really a nice touch. They look better on the table and they just seem better to me as I pick them up and put it on my lap. Now, just like I enjoy the experience of washing dishes by hand, I enjoy the experience of ironing napkins. Saturday – even though we would not even use cloth napkins that night – I spend about an hour ironing napkins. I listened to music and turned squares of rumpled fabric into perfectly folded and flat piles of sorted napkins. It was peaceful and relaxing. A good thing.