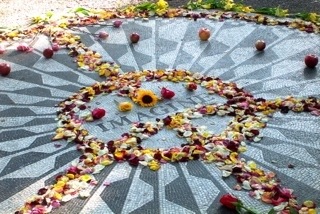 A very distinct childhood memory that I have is being in the “major” department store near our town. I was with my mom. I may have been seven or eight. I don’t remember either of my other sisters there – just me – and we were probably buying some clothes for me. The saleslady asked me a question, and rather than answer her, I cowered behind my mother and did not say a word. My mother did not say anything at the time, but later she let me have it. When people talked to me, I was to answer.

​Flash forward twenty years. I am fairly newly married. Recently moved to a new city. A new mom. As an independent person, I did pretty well creating my own routines. Nothing screamed out to me that I really didn’t know many people, and that I certainly hadn’t made any friends in this new life. That was, until I went out of my comfort zone and it became evident to me that it was true. And then I would get mad at everyone else.

​It made sense. Here I was, am educated, funny, young woman who had just embarked on this amazing journey of motherhood. Why wouldn’t all of these co-workers or new friends of my husband be clamoring to get to know me? We didn’t go out too often, but I remember many occasions when we would go home and I would complain or just clam up because no one talked to me; or that people asked me one question and then that was it. I blamed them, but then I started blaming myself. Maybe I was just too boring. I was happy with my life of staying home and taking care of my baby and then babies, but I got that maybe it wasn’t of much interest to people who weren’t there in their own life. So, for awhile, I langoured in the self-indulgent temperament that it was what it was – so be it.

​I guess that period of my life didn’t last a huge long time, but it kind of feels like it did. When one is willing to accept a situation that doesn’t make you happy, it can be a burden. When I would go into a social situation accepting that people wouldn’t be interested in me, how could good things possibly result? I was back in that situation where I would hide behind my mother and not say a word.
​But the lesson that I learned gradually – and sadly, I am still needing to push myself on this years later – is that there are very few people out there who are perfectly comfortable or really good at walking up to a stranger – or a barely known person – and engage that person in a conversation. It is hard. And when you have other people around you who you know and are comfortable with, why would you take the time and effort needed to talk with someone new.

​I can’t answer that question for everyone. For me, working at it has made me happier with myself. I can now be that person who talks to the person who no one seems to be talking with, and I can kind of keep a conversation going. I am not great at it by any means, but I am getting pretty good at asking questions and drawing people out. It sometimes leads to reciprocation where the person tries to get to know me better, but, I have to say, that it doesn’t always. People almost always like to talk about themselves. I like to hear about people. It is a good match.

​In essence, there is still a great deal of that little girl who hid behind my mother in me. What is different, however, is that I am a person who relishes the other people in my life that have come into my life in ways that required me to be open and interested and interesting. I would never have those people in my life if I hid myself.

I never know when the next great connection will be made. I also know that every time I push myself to talk to someone that I don’t know or barely know, it gets easier. I learn something. Part of me hopes that the person enjoyed the chance to get to know me a little bit better.

3 thoughts on “Talking With Strangers”