There are few fonder growing up memories that I have than the ones that involve music. Many are about record players and lyrics. Up in my bedroom, I would spend hours listening carefully and transcribing lyrics to songs that I loved  into a special notebook (those were the days that lyrics were not often found on album notes, and there certainly was no Internet to refer to). Usually, by the time I finished, the transcription was unnecessary; I would already know the song by heart. Besides a new song in my repertoire,  another outcome of this activity would be the unfortunate scratches caused by me lifting the needle and putting it down too abruptly. There are still songs that I hear where my brain automatically puts in the skip.

I am not that lyric devotee anymore. There are probably a number of reasons for this, but I think there are two main ones. Number one: I am no longer that reflective teenager. Number two: I don’t take the time to listen to most albums intently and as a whole.

And I will write a little about it. First up: 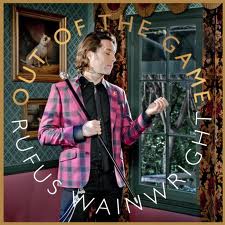 I first knew Rufus as the baby that his dad, Loudon wrote about in his song “”Rufus is a Tit Man.” Over the last several years, I have very much liked who Rufus has grown up to be. He is a writer of interesting songs, and despite periods of personal problems, he has put out good music and performances over the years. These days, his personal life seems together and his new album is his move back more toward his earlier music style.

Here are two songs that I especially liked:

Rashida – I was going to pick two of the more somber songs to highlight, but I didn’t think that was fair since there really are some fun pop songs on this album. Rashida is one of them. This one, along with the bouncey beat, has the fun of bringing out Rufus’ inner snark.

The song has some serious doo-wopping, sax and brass. Someone pissed off Rufus and she is going to pay.

I got the outfit for the party, but you’ve taken away the invItatIon,

and I’d lIke to thank you, rashIda, for doIng thIs · and

gIvIng me a reason to wrIte a song·

I guess I’ll have to go a beggIng for

that was well, quIte stunnIng · and I’d lIke to thank you rashIda ·

for gIvIng me a reason

to call mIss portman · and to wrIte thIs song

Montauk – Rufus is now the father of a child with his childhood friend, Lorca Cohen (daughter of Leonard Cohen). Viva Katherine Wainwright Cohen will be raised by Lorca, Rufus and his partner. Viva’s middle name is in honor of her late maternal grandmother, Kate McGarrigle who died in 2010. Montauk is Rufus’ note to Viva years from now. It is asking for her patience when she is in the world of her two dads. It is asking her to forgive them for being who they are: guys with glasses, bad senses of humor, poor dressing habits, and the ability to not be nice to each other. He also reminds her that there is a shadow of her grandma who continues to be a presence.

The song opens with ocean sounds and a tinkling, driving piano that moves the song forward into a beautiful bridge before returning to a verse. The last part of the song slows and becomes more dreamy when he recalls the woman who is now a shadow. It all finishes with more ocean. I think he nails the hope of maintaining connection with a growing child, and it just a really pretty song.

kimono and see your other dad pruning roses

Hope you wont turn around and go

and see your other dad wearing glasses

Hope that you will want to stay for a while

Don’t worry I know you’ll have to go

and see your other dad seeing through me

Hope that you will protect your dad

and see your other dad feeling lonely

Hope that you will protect him, and stay

Don’t worry I know you’ll have to go

There she does wait for us in the ocean

And although we want to stay for a while

Don’t worry we all have to go

One day you will come to Montauk

Although I will not include it, Candles is an almost eight minute tribute song to his mom and is both gorgeous and heart wrenching.

I can’t say that I have all of the songs memorized yet, but I have a good understanding of the album, I have clear favorites, and I think I could sing along with a few and do a pretty good job.

Listen to the album here with Spotify: Out of the Game – Rufus Wainwright